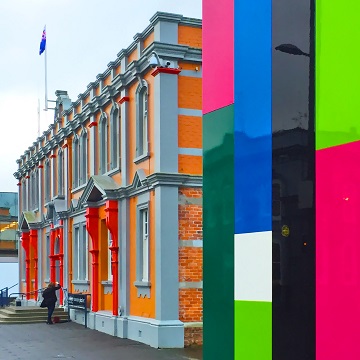 Victoria Street, Hamilton, New Zealand. Photo by Mark Pegrum, 2016. May be reused under CC BY 3.0 licence.

The biannual CLESOL (Community Languages and ESOL) Conference took place this year in the university town of Hamilton, south of Auckland. It addressed the theme of Learners in Context: Bridging the Gaps.

In my keynote on the first main day of the conference, I addressed the conference theme with respect to mobile learning in a presentation entitled Learners in context: Bridging everyday language learning gaps with mobile devices. I focused on the way that mobile devices can be used to help bridge many language learning gaps: between the haves and have-nots, between traditional and contemporary pedagogies, between episodic and extended learning, between formal and informal learning, and between classroom and situated learning. I suggested that in addition to asking our students to use their mobile devices to support their formal language courses, we should also draw their attention to the opportunities for informal education, where they can use their everyday devices in their everyday contexts to support their everyday language learning.

In their workshop, Many rivers to cross: Engaging learners using computer tools and mobile apps, Patrick Coleman and Daryl Streat from Lincoln University spoke about the inevitability of ongoing technological development, suggesting that educators need to keep up with it because of the implications for learning and work. They took workshop participants through a series of interactive activities accessed on the Many Rivers to Cross Blendspace website. Along the way, they strongly advocated that there must be pedagogical reasons for using new technologies, rather than using them for their own sake. For example, social media tools can be used to extend learning outside the classroom space. They mentioned several models which can be employed to frame our understanding of how we’re using new technologies pedagogically:

Referring to her new book Interaction Online with Lindsay Clandfield, she went on to suggest that interaction between humans and machines could be called weak interaction, and that between humans and humans could be called strong interaction. Much of the former involves tasks that are very behaviourist in nature, while the latter is not only motivating but vital for learning. There are many platforms, ranging from Moodle through Edmodo to Facebook, where students can communicate with others as individuals and groups. She suggested that there are 5 main types of interactive language learning tasks:

She went on to give examples of interactive tasks pertaining to each of these categories, and showed how they can generate very different types of interaction patterns, such as:

In her talk, Getting it write: Using technology (Google Slides and Blogger) to help engage reluctant writers, Navjot McCormack from Linwood College, Christchurch, spoke about the use of technology to help English language learners overcome barriers to writing. She reported on a research study of students using Google Slides collaboratively to create group presentations, followed by reflecting individually on the process on personal blogs. Despite initial hesitation, students generally demonstrated a high level of interactivity, negotiation, problem-solving and interdependence. Students reacted very positively and collaborated well in the slide creation task, and even during the personal blogging task they were seen helping each other. One important facet of this project was the co-construction of knowledge: students enjoyed playing the role of technology experts and helping the teacher and other. There were a number of challenges: students were less keen on editing the slides once they had been created; although they enjoyed sharing their presentations, they gave little constructive feedback, which is an area that needs to be trained; and technology issues and slow internet speeds were frustrating. Overall, this was an empowering exercise for students.

In his talk, Reflections of a late adopter: Language learning principles and MALL, John Macalister from Victoria University in Wellington suggested that we need to ask how new technologies add value to our teaching. Discussing language learning apps, he suggested that while they have some advantages, some of them also have key limitations: they do not always use language in meaningful ways; they do not necessarily present the most frequent language; and they may cause interference by presenting similar words and phrases simultaneously. He pointed out that these apps can play a useful supporting role for motivated language learners who already have some experience of the language, and suggested that they could be used in a targeted way by teachers to complement language learning in the classroom, especially if teachers exploit the gamification elements typical of these apps.

In his presentation, The future of language learning: AI and CALL, Wolfgang Sperlich from NorthTec asked whether we might see robotic language teachers in the future. He spoke about the trend towards automation of language assessment, where all components including writing and speaking are assessed by software using statistical matching. There are various dangers here, including that teachers will increasingly teach towards these automated tests, using the restricted conceptions of language that may underpin them, and the limited tasks that may compose them. He concluded that AI and CALL have positive potential but that we need to guard against their limitations.

In her presentation, Mapping the spaces between learners and teachers: A guide for critical pedagogy, Margaret Franken spoke about the interplay of complex epistemological and pedagogical space. In her discussion of pedagogical space, as a space within which there is a particular configuration and alignment of learning resources, she suggested that in addition to the well-known social constructivist concept of the ZPD (Zone of Proximal Development), we should also consider the subconcepts of the ZAA (Zone of Available Assistance; that is, the resources available to provide assistance to a learner) and ZPA (Zone of Proximal Adjustment; that is, the subset of the ZAA which is appropriate for a learner at a given moment). These are concepts drawn from the work of Rosemary  Luckin in particular. She went on to mention that we need to take into consideration spaces which are beyond our educational gaze, such as those social media forums where students exchange academic support with other online community members, who thus come to function as brokers of literacy practices and knowledge.